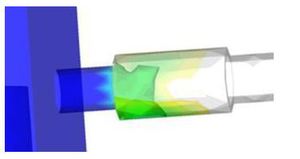 Power transformers are the cornerstone of the electricity grid and their protection is crucial for all the generation, transmission and distribution companies around the world. Power transformer explosions are common and lead to fire, risk to human life, power outages, environmental pollution, generating huge expenses.

Therefore, a strategy to prevent transformer tank rupture was developed [1]. This strategy is based on the direct mechanical response of up to several fast Depressurization Sets (DS) to the first dynamic pressure peak induced by electrical faults, which we define as the TRANSFORMER PROTECTOR (TP). In the same paper, the operation of this fast depressurization strategy was experimentally validated: if the oil and gases evacuation through the fast Depressurization Set is activated within milliseconds by the first dynamic pressure peak before static pressure increases, the transformer explosion can be prevented.

In order to minimize the costs and the risks of experimental testing, a compressible two-phase flow numerical simulation tool based on a 3D finite volume method was developed to study transformer explosions and possible strategies for their prevention. The current paper shows the applications of this simulation software towards studying the influence of real mechanical transformer protections. In this paper, simulations on a transformer geometry with and without Oil Bushing Cable Box (OBCB) protections will be presented and their results discussed.

Power transformers are highly dangerous due to the large quantity of oil they contain in combination with high voltage elements. When the oil loses its dielectric properties, low impedance faults may occur, which result in arcing. The first dynamic pressure peak increases at the location of the arc, leading to pressure waves propagating at the speed of sound within the oil, about 1000m/s. These pressure waves reflect off tank walls which build up static pressure within the transformer tank, ultimately resulting in a potentially violent tank rupture and fires when static pressure reaches the tank limit.

Transformers are generally built to withstand a static pressure of 0.7 bar (10.15 psi) gauge pressure. In  2004 the independent Brazilian high voltage laboratory CEPEL conducted a series of experiments on transformer arcing and depressurization [1]. Simulations show that the internal overpressure for the parameters of the CEPEL tests would have resulted in static pressures of 7 bar (101.5 psi) gauge, 10 times greater than the withstand limit of the transformer tanks.

Section VIII of the ASME code defines how to determine the thickness of thin shells under internal pressure. As an example, Division I, UG-27 is used to determine the thickness of a spherical shell. If  we make the assumption that the internal pressure is much less than the product of the maximum allowable stress of a material and the efficiency of the bolts/welds, then we can conclude that the transformer tank should have been approximately 10 times thicker to avoid transformer explosion without protection [1]. Such a tank design would induce additional economical and industrial strains. For this reason, an alternative explosion prevention method is investigated.

The strategy reported in this paper involves the rapid evacuation of oil and gases within milliseconds of the arc event by means of a passive mechanical system, called the TRANSFORMER PROTECTOR. A

complete experimental study of this strategy was previously reported in [1]. As live tests are both highly expensive and dangerous, an alternative computational simulation tool has been developed based on the results of the CEPEL tests.

The aim of this paper is to present the results of the application of this computer simulation tool towards understanding the operation of a rapid oil evacuation strategy under a variety of different situations. First, a computational simulation tool is briefly discussed. Then, the parameters for the simulations are presented. Finally, the time evolution of an internal overpressure inside protected and unprotected transformers is detailed. The simulation tool is used to look at the effect of the location and number of fast  tank Depressurization Sets, under two arc configurations.

The described physical phenomena are modeled as a 3D compressible two-phase flow, using a set of partial differential equations based on a 5 equation model developed in [2]. These equations represent the conservation of mass, momentum, and energy, as well as the advection of the volume fraction for each phase. Effects such as gravity, viscosity, and heat conduction are added in the modeling to adhere to physical constraints. One of the major characteristics of the model is its ability to accurately depict the pressure wave propagation inside liquids and gases. A finite volume algorithm is adopted to transform the system of differential equations into algebraic equations, and therefore computationally solve the system. The volumes are defined by an unstructured 3D mesh, to allow a precise description of complex geometries such as transformer tanks.

In the test series, the equations are solved allowing for phase change through cavitation. This properly models extremely low local pressures as a consequence of fast depressurization.

In order to study the fast direct-tank depressurization protection strategy, it is important to accurately model the transformer geometry, understand the initialization of the phenomena, and account for the tank explosion prevention technology.

Rather than downstream piping elements from an actual TP, atmospheric boundary conditions are used at the locations of the Depressurization Sets.

3.2    Description of the Electric Arc

b)After the initial oil vaporization and gas bubble creation, the electrical arc will no longer be in direct contact with the transformer oil, and therefore further vaporization is limited. Instead, the arc energy transferred to the gas  is used to heat the gas up, generating plasma. However, the cracking of the vaporized oil does not have as pronounced effect on the pressure wave generation as the initial vaporization process.

The bubble is roughly cylindrical in shape, with a length and radius of approximately 0.4m and 0.2m, respectively, and under 11 bars of pressure. However, due to mesh variations, the result is not exactly identical.

Simulating the operation of the depressurization system is a difficult task. This has been accomplished in the computational tool by removing the separation between the oil and the Decompression Chamber as a function of the pressure difference across the barrier. Furthermore, the opening function is constrained to open in progressively from the center first, and then outwards. A comparison of the oil evacuation from live tests (left) and simulations (right) is shown in Figure 2.

The simulation parameters used for the tests are described in Table 1, Table 2 and Table 3, below. The

oil and gas are modeled with the stiffened gas equation of state.

* Peak “Tank” pressure may occur at any point in the transformer, including turrets

4.1  Effect of the Arc Location

We note some important differences between Left and Right locations. Table 6 gives a comparison of the  peak pressures at important points in the transformer. Although the pressure profiles are similar, pressure peaks vary by as much as 10%.

Finally, we note that with OBCB protections regardless of where the initial fault occurs a DS will likely be close to the arc. In the left arc location the first DS activates

1.25 times earlier. The right case is even faster activating 3 times sooner than the HDS only due to its proximity to the arc.

4.2  Effect of the OBCB protections

We can see a trend that the additional OBCB protections allows for the substantially more quickly activation of a DS, if an arc is sufficiently close to a turret.

Furthermore, the simulations show that the additional OBCB protections help limit the peak pressures experienced at the pressure sensors located in all three bushing turrets, as seen in Table 4. The pressure evolution of both cases is presented in Figure 4 and 5.

A three dimensional simulation tool based on a five equation hydrodynamic model has been used to investigate a protection strategy against transformer tank rupture. The use of this protection strategy serves as an alternative to designing transformer tanks as pressure vessels, which by application of the ASME standard would require an impractical factor of ten increase in the tank thickness. By applying the simulation tool, the efficiency of a fast tank depressurization method has been studied.

Simulations have been performed on a 400 MVA transformer tank to determine the effect of adding three Oil Bushing Cable Box protections in addition to a single Horizontal Depressurization Set. As modeled, the turrets on which the additional OBCB protections are installed are openly connected to the main tank, without internal obstructions between the main tank and bushing turrets.

Omar Ahmed is currently working at Transformer Protector Corporation as a Research Engineer, where he is modelling the physics associated with transformer explosion and depressurization strategies. He specializes in optimizing the computational fluid dynamics algorithms to model energy transfer from the arcing event to the transformer oil, and the subsequent pressure wave propagation.

Anne Goj is currently working at Transformer Protector Corporation as a Research Engineer where she spends so much time calculating quantities with physics that she occasionally wonders how her degrees all have “chemistry” written on them.

Anne studied theoretical and computational physical chemistry at Cornell University before relocating to Texas in 2007.