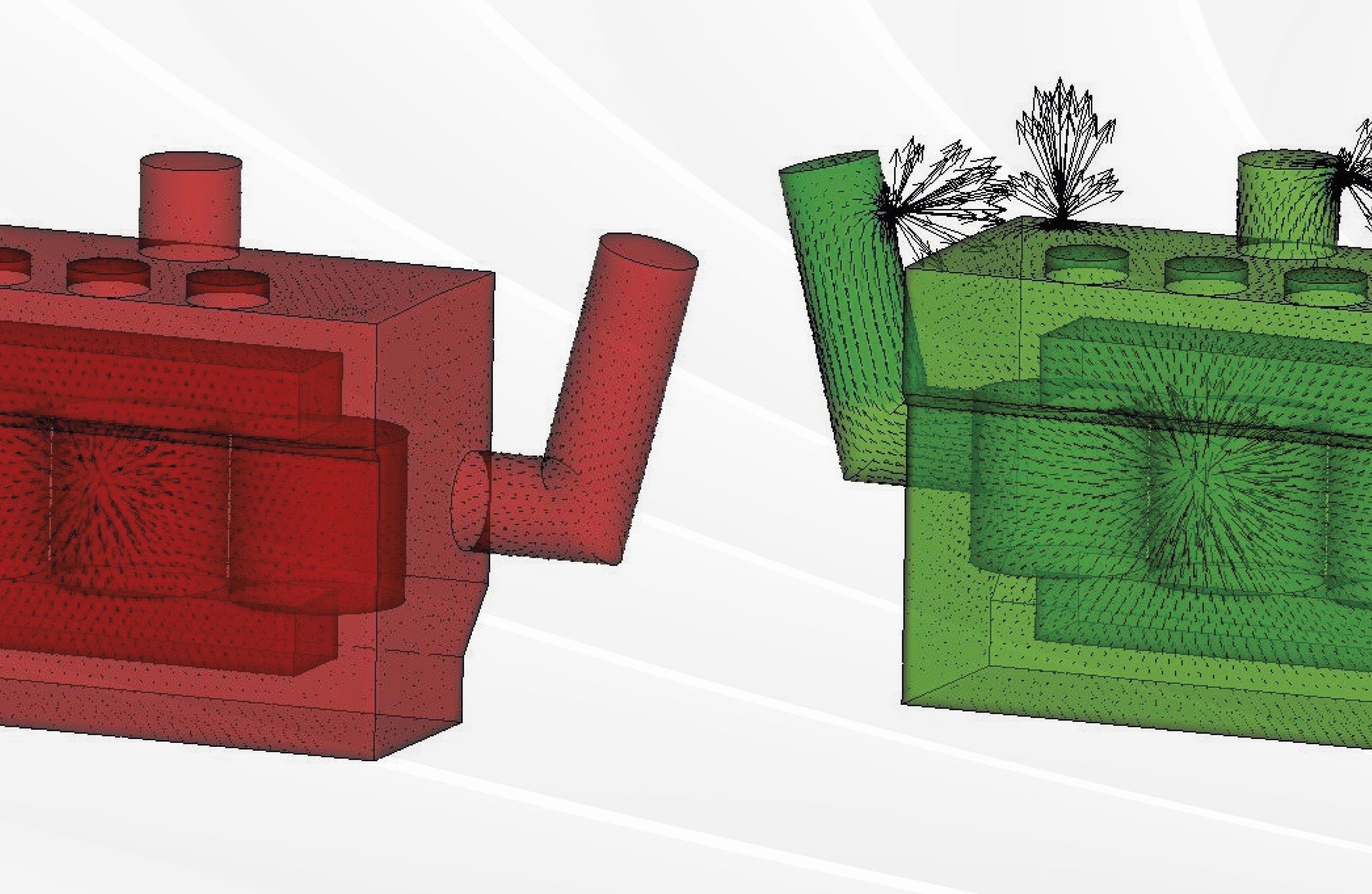 Liquid-filled power transformers typically contain thousands of liters of flammable insulation. When this insulation breaks down, there is a high risk of transformer failure that would endanger human life, generate envi- ronmental hazards, and destroy valuable assets. Because live tests involv- ing arcing are expensive and potentially dangerous, numerical simulations are a useful alternative to study faults over a wide range of transformers.

Since bushings are common sources of transformer failure, we examine the role of deploying a transformer fast depressurization system on two simulated transformer designs, with protections localized in the bushing turret region, to ensure that the transformer is robust to internal arcs.

Liquid-filled power transformers typically contain thousands of liters of flammable dielectric insulation. When this insulation breaks down, the resulting short circuit triggers a chain of chemical reactions that produce a mixture of combustible gases such as acetylene and hydrogen. The sudden gas formation can quickly pressurize the transformer tank beyond its withstand capacity to conditions where catastrophic structural failure is imminent.

The explosion of a transformer not only costs the power industry substantial financial losses, but also can endanger human life and environmental safety. A 2015 survey report on transformer reliability by CIGRE found that annual transformer failure rates are on average about 1 %, with rates over 1.3 % per year for high risk classes of power transformers [1].

Among the various root causes reported, failures related to bushings are frequent sources of transformer fire and explosion. The same 2015 CIGRE document concluded from a survey of 675 major failures of transformers with voltage classes of at least 100 kV that bushings were the source of failure for 48.5 % of cases resulting in explosion or fire, for which the failure origin is known. 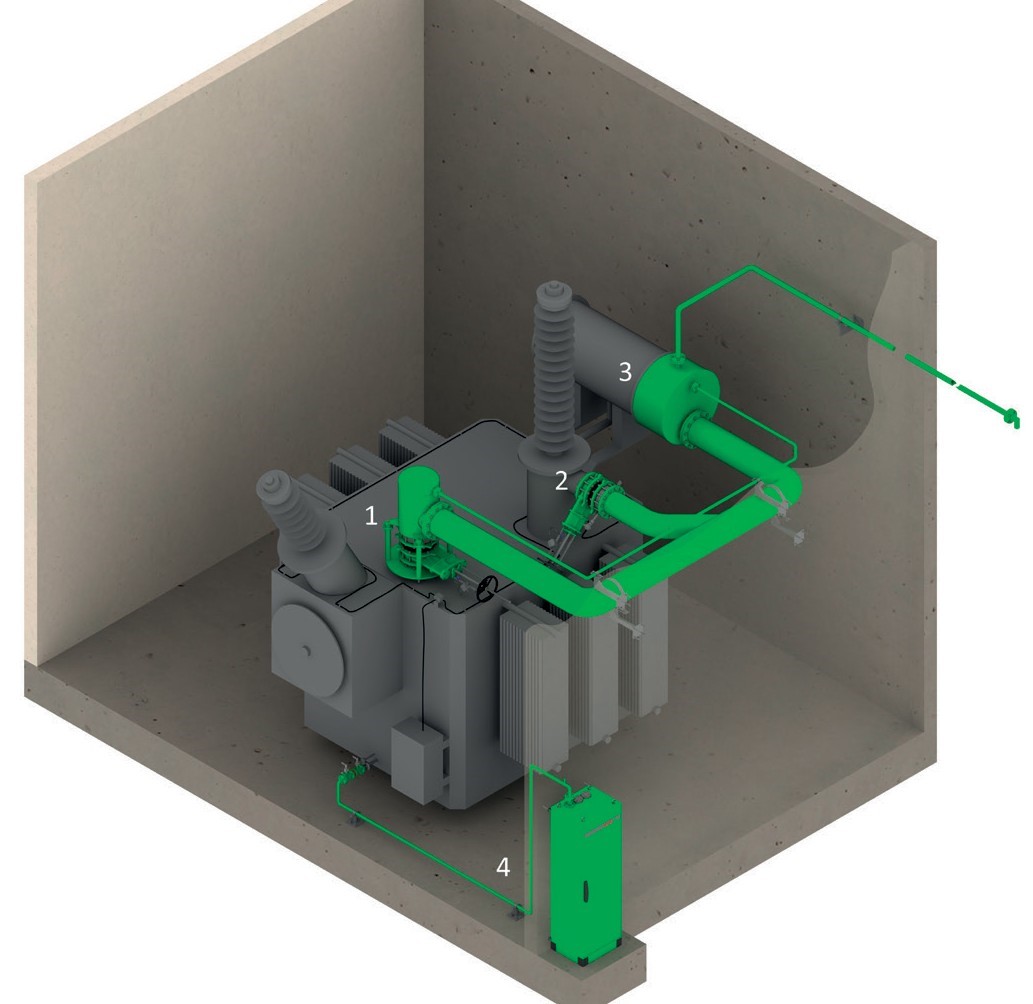 The studied protection technology, the TRANSFORMER PROTECTOR (TP), is shown in Figure 1. This technology is consistent with the NFPA 850 Recommendation published in 2015 [2] on transformer fast depressurization systems, whose aim is to mitigate transformer failures due to internal arcing.

An installed transformer fast depressurization system is shown in Figure 2. 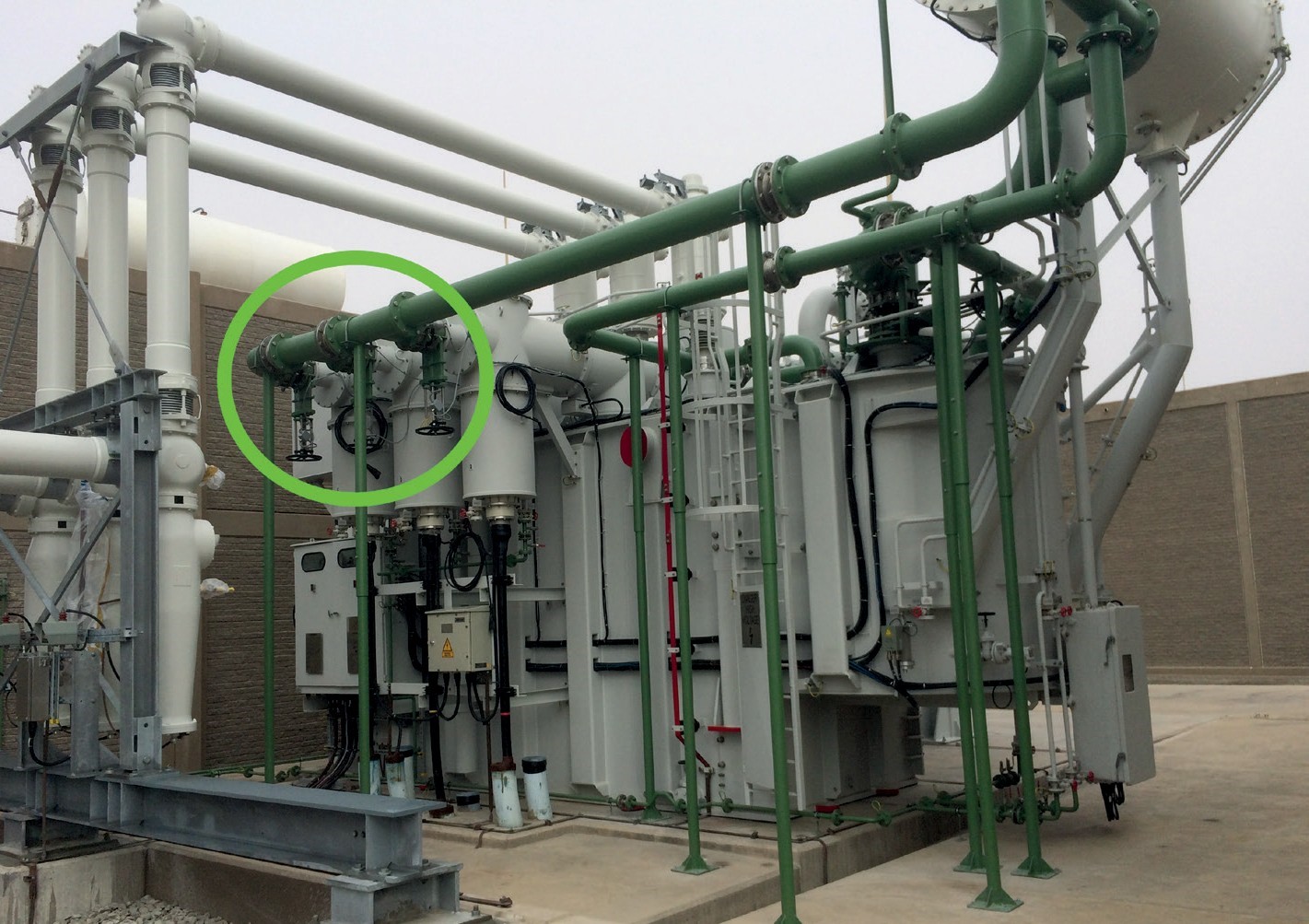 "Short circuit in a transformer leads to a sudden gas formation, which can quickly pressurize the tank beyond its withstand capacity to the conditions where catastrophic structural failure is imminent. The explosion not only costs the utility substantial financial losses, but also can endanger human life and the environment" 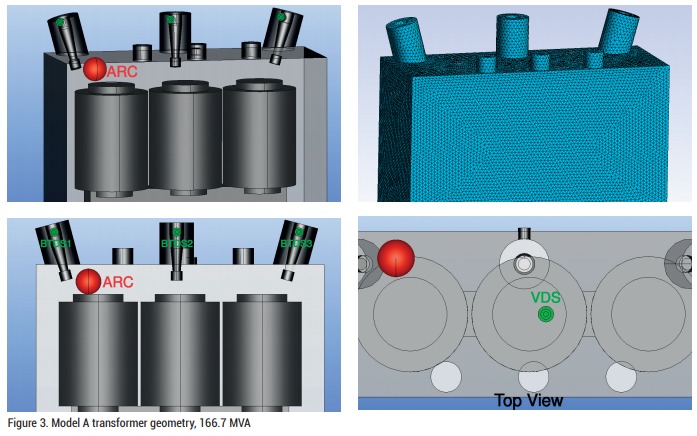 "The TP operates within 9 ms of the arc initiation, depressurizing the transformers rapidly and keeping the pressure safely below the tank withstand limit of 1 to 2 bar"

Using software defined and validated in [3] and [4], post short-circuit fluid pressures are studied in these model transformers. This simulation software solves the Navier-Stokes equations of a two-phase compressible fluid system using a finite volume methodology with a Godunov solver to calculate the solutions to the Riemann problems. The solutions are based on a reduced set of five equations, representing the advection of the gas phase fraction, and conservation equations for the densities of both phases, the momentum of the liquid-gas mixture, and the total energy of the mixture [5].

Within this model, both gas and liquid phases within a tetrahedral cell relax infinitely quickly to a local pressure and velocity equilibrium [6]. The thermodynamic relationships between internal energy, density and pressure are calculated assuming the ideal gas equation holds for the vapor phase and the stiffened gas equation holds for the liquid phase. The stiffened gas equation of state is an equation of state often used in explosion research to account for the compressibility of liquids at extreme pressures [7].

A 10 MJ arc was simulated in both tanks, as it is generally considered to be an arc energy sufficient to rupture a transformer tank, in the absence of a fast depressurization system [9]. The duration of the arc is set at five cycles, a typical time scale for circuit breakers to act within, which is approximately 83 ms for transformer A and 100 ms for transformer B.

Based on anecdotal evidence observed in the field, we consider that a protection technology that depressurizes a transformer within this 200 ms time scale will prevent catastrophic tank rupture, and subsequent fires. Therefore, using this criterion the protection solutions simulated would be sufficient to ensure that the transformer will not experience an explosion and fire. 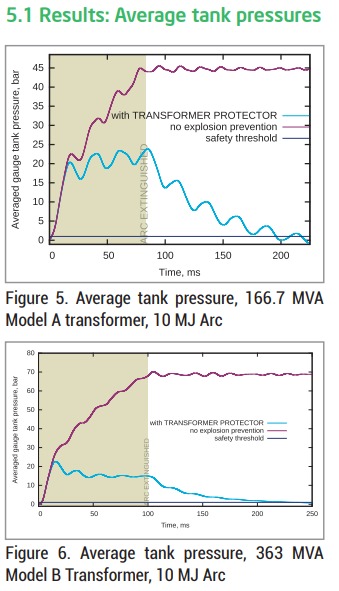 Due to much lower oil outflow and slower tank depressurization, PRD is not as effective as TP in preventing rupture, given a 10 MJ arc

Comparison with the pressure relief device (PRD) Because there are no standards for the liquid depressurization performance for a PRD in a power transformer, the gas performance is used as a proxy. Specifically, a conservation of energy argument can be made relating the change in kinetic energy of the oil to the pressure difference across the PRD, as viscous forces are negligible compared to the pressure gradient and inertial forces in this parameter space. This implies that the speed of outflow scales inversely proportionally to the square root of the density. 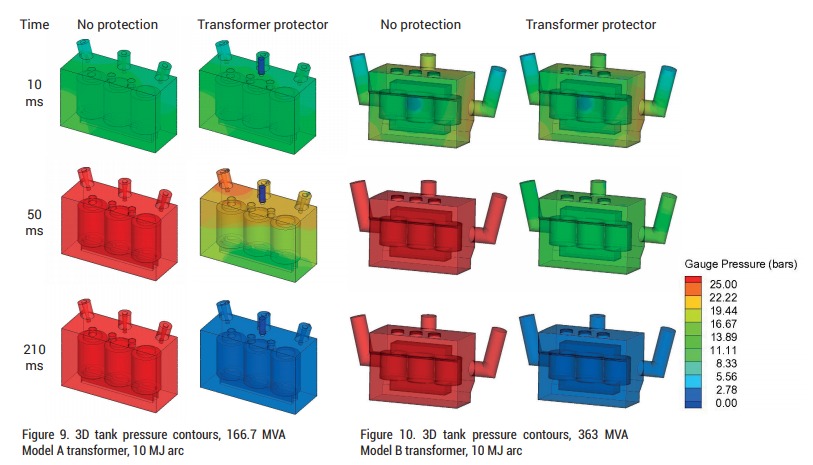 The IEEE C57.156 standard [8] has measured speeds for the outflow of gas that we will consider as upper and lower bounds of PRD performance. To translate these measurements to a liquid filled transformer, we multiply the specified speeds with the ratio of the square root of air density, at a temperature of 298 K and a pressure of 1.01 bars, to the oil density, 850 kg/m3 . Because these measurements are made for limited pressure differences, this should be considered only a preliminary analysis.

We conclude that because the much lower oil outflow would not lead to a fast depressurization of the transformer tank, the PRD is not sufficient to prevent rupture in these transformer tanks, given a 10 MJ arc. 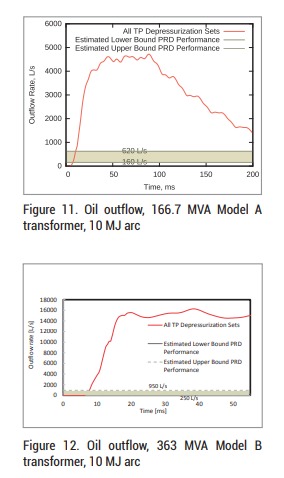 Simulations of pressure rise within a three-phase 166.7 MVA transformer, and a three-phase 363 MVA transformer have been used to evaluate effective tank rupture mitigation strategies, given a typical high energy arc of magnitude 10 MJ. As these simulations are limited in scope, i.e. they do not model all possible arcing scenarios nor do they consider the energy absorbed by the transformer tank structure through wall deformations and vibrations, these conclusions should be considered a representative guide of a typical arcing situation and a qualitative demonstration of the marked differences between a sealed tank without transformer explosion protection and the same tank equipped with a fast depressurization system.

Based on the simulations, we may conclude that the transformers without the fast depressurization system showed a sustained increase in tank pressures well over the expected safety threshold of 1 bar. The final steady state pressures calculated for the tank without explosion prevention devices were much greater than 10 bar, pressures sufficiently high to lead to tank rupture since transformer tanks are designed to withstand steady pressures of only 1 bar. Pressures were higher for the bushing turret region than the main tank, indicating possible bushing failure. For the same arc models, the transformer tanks simulated with the fast depressurization system showed that all depressurization sets activated by 9 ms, far earlier than the arc duration.